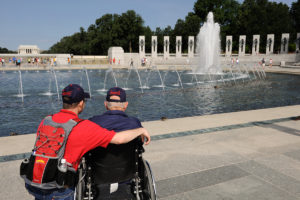 If Kathleen Bien gets her wish, 100 veterans from North Dakota will be heading to Washington, D.C., in the fall.

The executive director for the Western North Dakota Honor Flight – part of the national Honor Flight Network – hopes to raise the $160,000 necessary to transport 100 veterans and their escorts to the nation’s capital in October.

“We charter a jet so we’re all together, and it’s a nonstop flight,” she said. “We’ve done some fundraising and raised approximately $60,000. But we haven’t had a lot of fundraising events, so we’re hoping to get that going this spring.”

The Honor Flight Network is a network of organizations that raise money to take veterans of World War II, the Korean and Vietnam wars on trips to Washington, D.C., allowing them to visit monuments, share stories and remember friends. The travel comes at no cost to the veteran.

“I met with some people and asked if they were interested in helping me form the board,” Bien recalled. “The western 32 counties (in North Dakota) are serviced by us.”

In the fall of 2020, the Western North Dakota Honor Flight was supposed to make its first trip, but the pandemic forced the cancellation of fundraising events and the trip itself.

“We don’t want to do anything that might endanger the health of veterans,” she said.

Bien is hoping to continue fundraising this spring and summer with events like a silent auction, fun walk, motorcycle poker run and golf scramble.

When the time does come, it’ll be a busy two days. Everyone will leave on a Sunday morning at 7 a.m. from the Bismarck airport, arrive in Washington, D.C., and start touring sites such as the Tomb of the Unknown Soldier and the memorials for the Korean and Vietnam wars, as well as the World War II memorial. It also includes a trip to the National Archives, which houses the Constitution and the Declaration of Independence.

That night, a banquet is held to honor the 100 veterans. The following morning features more sightseeing before everyone gets back on the charter jet. A reception is held when they return to Bismarck.

“The veterans love it,” said Bien, who attended with the Fargo-Moorhead chapter. “On the way there, there are so many chatty voices, and everybody is getting excited and talking about military times. On the way back, everybody is sleeping. It wears them out, but they love it.”

Bien said the next step is to restart fundraising in anticipation of the October trip.

“For many of our veterans, it’s giving them one last tour,” she said. “Everything is completely free to the veteran. The only money they need to take is if they want to purchase souvenirs.”

To donate online, visit westernndhf.org. To donate by mail, send a check or money order to Western ND Honor Flight, PO Box 265, Bismarck, ND, 58502. Be sure to include your name, address and if you would like the donation in someone else’s name (optional).