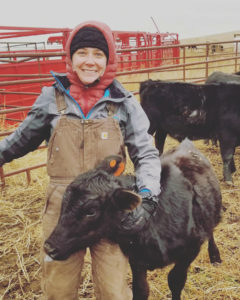 Brittney Barnett of Arnegard still struggles once in a while with the irregular schedule that accompanies farm and ranch life.

Still, she’s grown to love it.

Barnett and her husband Daniel Dwyer farm in McKenzie County after Barnett moved from Missoula, Mont., where she worked for the Montana Conservation Corps. They were married in 2019.

Barnett, originally from Valley City, said large farming operations came to mind when she thought of agriculture in North Dakota, a view that has since changed.

“I never realized there are people in North Dakota doing all these amazing things I didn’t know about that are focused on the small side of agriculture,” she said.

Barnett said she was drawn to the program because of its smaller class devoted to learning diversity in agriculture.

“When I go to farming workshops, there might be 150 people and they’re mostly men,” she said. “I really liked the component of a small group of people making connections and not being afraid to ask questions.”

Dwyer and Barnett have a diversified rotation of spring wheat, durum, barley, peas, lentils and safflower. They also raise livestock.

One crop Barnett knows she won’t be growing is cotton, which is why she was eager to visit Nashville last November for the first meeting of BFI. A trip to a cotton farm had been planned, but the pandemic changed all of that. Meetings have been over Zoom instead.

“I really would have loved to have had that extra knowledge,” Barnett said. “And I’m much better at connecting with people in person. It’s little things like 15-minute breaks where you go out to the lobby and engage in conversation.”

Nonetheless, Barnett is making the most of her opportunity. She’s learning valuable information about farm transitioning, which she and her husband are going through. She’s also learning about the business side of agriculture including a personal session with Poppy Davis, an ag business and policy consultant.

“I’m really interested in the accounting and taxes and how this works,” Barnett said. “They talked about co-ops, and I got to speak with (Davis), and she gave me hope that women can be on boards.”

The BFI program always ends with the annual NFU Fly-in to Washington, D.C., and Barnett is hopeful she’ll be able to attend. She encourages other young farmers to consider applying for BFI in the future.

“It’s a great experience, and the tools I am learning, I will be able to implement right away,” she said. “You won’t regret it.”

As for her irregular schedule, she’s throwing caution to the wind.

“I like having a detailed plan for my day, so this has been hard to get used to,” she said of farming. “It’s a rain day, so you can’t do this, or you can’t go haying until 2 p.m. I really struggled with the lack of structure.

“Last year, I threw away my planner. It’s just easier to throw it away and go with the flow.”