Check out NDFU’s livestock reform page to learn more about our fight for fair markets, truth in labeling and increased local and regional slaughter capacity.

According to recent news reports, the Environmental Protection Agency (EPA) intends to reject dozens of retroactive small refinery exemptions (SREs). The decision confirms EPA’s intent to honor a federal court ruling that EPA had abused the Renewable Fuel Standard’s (RFS) SRE process. In its decision, the court stated EPA could only approve extensions of waivers already in place. This spring, refiners rushed to apply for retroactive waivers in an attempt to circumvent the court’s decision.

National Farmers Union (NFU) and a coalition of groups praised the news, and also highlighted EPA’s decision not to request a re-hearing. “Now, more than ever, our nation’s farmers and ethanol producers are counting on the RFS to provide market stability and certainty,” the groups said. NDFU has advocated for an end to EPA’s misuse of SREs.

On Thursday, the Senate failed to pass a new coronavirus relief bill that would have included $20 billion in support for farmers, ranchers and processors. The legislation was the latest attempt to break a congressional stalemate on the next coronavirus response package. Talks fell apart in August after lawmakers failed to forge a compromise between the House’s more than $3 trillion HEROES Act and the Senate’s $1 trillion HEALS Act.

COVID response is one of a host of issues NDFU is tracking in the final sprint to Sept. 30, when Congress is expected to break until after the election. Before the end of the month, Congress needs to pass a fiscal year 2021 appropriations bill or pass a continuing resolution to avoid a government shutdown. The livestock mandatory price reporting law also expires on Sept. 30. NDFU continues to push for the 50/14 proposal to be included in that legislation.

As part of its ongoing effort to promote truth-in-labeling, NDFU backed a new initiative to strengthen “Made in USA” standards. The Federal Trade Commission (FTC) recently published a proposed rule that would restrict “Made in USA” claims to products originating and processed in the United States. In comments submitted on Friday, NDFU President Mark Watne cited the organization’s strong support for mandatory country-of-origin labeling. In the absence of COOL, Watne said “it is critical that voluntary labels are subject to strict standards that prevent consumer confusion.”

This is NDFU’s third attempt in two years to establish integrity in voluntary country-of-origin labeling schemes. NDFU has twice supported petitions to USDA’s Food Safety Inspection Service urging for the “Product of U.S.A.” label to be limited to products derived from animals born, raised and harvested in the U.S. NDFU also reaffirmed its support for mandatory country-of-origin labeling (COOL) in a letter sent to North Dakota’s congressional delegation this spring. 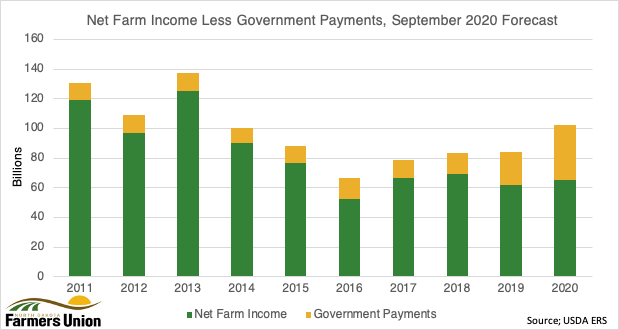 In its updated Farm Sector Income Forecast, USDA’s Economic Research Service is projecting a $19 billion increase in net farm income in 2020. The increase is largely driven by increased government payments. Direct government payments are expected to total $37 billion, accounting for 36% of net farm income.  On the other hand, farm cash receipts are projected to decline by $12.3 billion to the lowest level in a decade.

Farm debt is expected to continue its steady climb and, when adjusted for inflation, will reach the highest level since 1981. The farm debt-to-asset ratio will increase for the eighth consecutive year.

National Farmers Union is hosting its legislative fly-in virtually next week with a full slate of congressional meetings and briefings with USDA and congressional leaders. This year’s fly-in will focus on a broad range of topics including agricultural market reform, pandemic recovery, rural infrastructure and climate-smart agriculture and biofuels. NDFU’s Board of Directors and Policy & Action Committee will meet with North Dakota’s congressional delegation to urge strong policies for family farmers and ranchers.

The Coronavirus Food Assistance Program (CFAP) applications closed yesterday. As of Monday, only $9.72 billion of the allocated $16 billion in CFAP funds had been distributed to producers. That funding went to nearly 602,000 farmers and ranchers. North Dakota producers have filed 16,796 applications and received $274.46 million in payments.

Secretary Perdue recently said a second CFAP would be announced shortly for farmers and ranchers affected by the pandemic. NDFU has urged USDA to cover livestock losses incurred after April 15 and to increase support for crop farmers. Perdue has indicated that the same eligible commodities would be covered by the new program.

Ask NDFU
Have a question, comment, or concern? Focused on a policy issue we didn’t discuss here? Send Matt Perdue an email at mperdue@ndfu.org, and we will try to include it in the next edition.