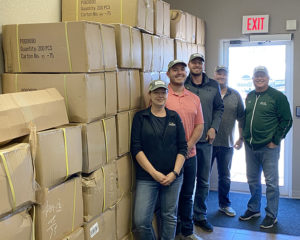 For farm policyholders of Farmers Union Insurance, a free gift is on the way.

Ressler said the idea grew out of a brainstorming session. The cap is based on Farmers Union Insurance’s “old cap” promotion that saw advertisements run in publications and on TV.

“We talk about the what-ifs, and I said, wouldn’t it be cool if we could replicate that cap and give one to every farm policyholder in the state,” he said. “My first thought was, how do we do that?”

Farmers Union Insurance worked with the same vendors that make the jerseys it often gives away at Bismarck Lark baseball games and Bismarck Bobcat football games.

Ressler said the cap giveaway is meant to recognize producers and the long hours they work to provide an affordable, abundant food supply.

“The general population, a lot of times, forgets that we spend less per capita of our disposable income on food than any modernized country in the world,” Ressler said. “We’re very fortunate. We forget where it comes from and how hard people work.

“We’re proud to represent and protect those (producers).”

Ressler said caps are being distributed to agents, and if a policyholder has not received their cap, they should contact their Farmers Union Insurance agent.

“This is a tribute to agriculture,” Ressler added. “Thank you to all of our producers.”