Edible Forest in Fargo will feature many fruit trees, prove they can be grown in ND 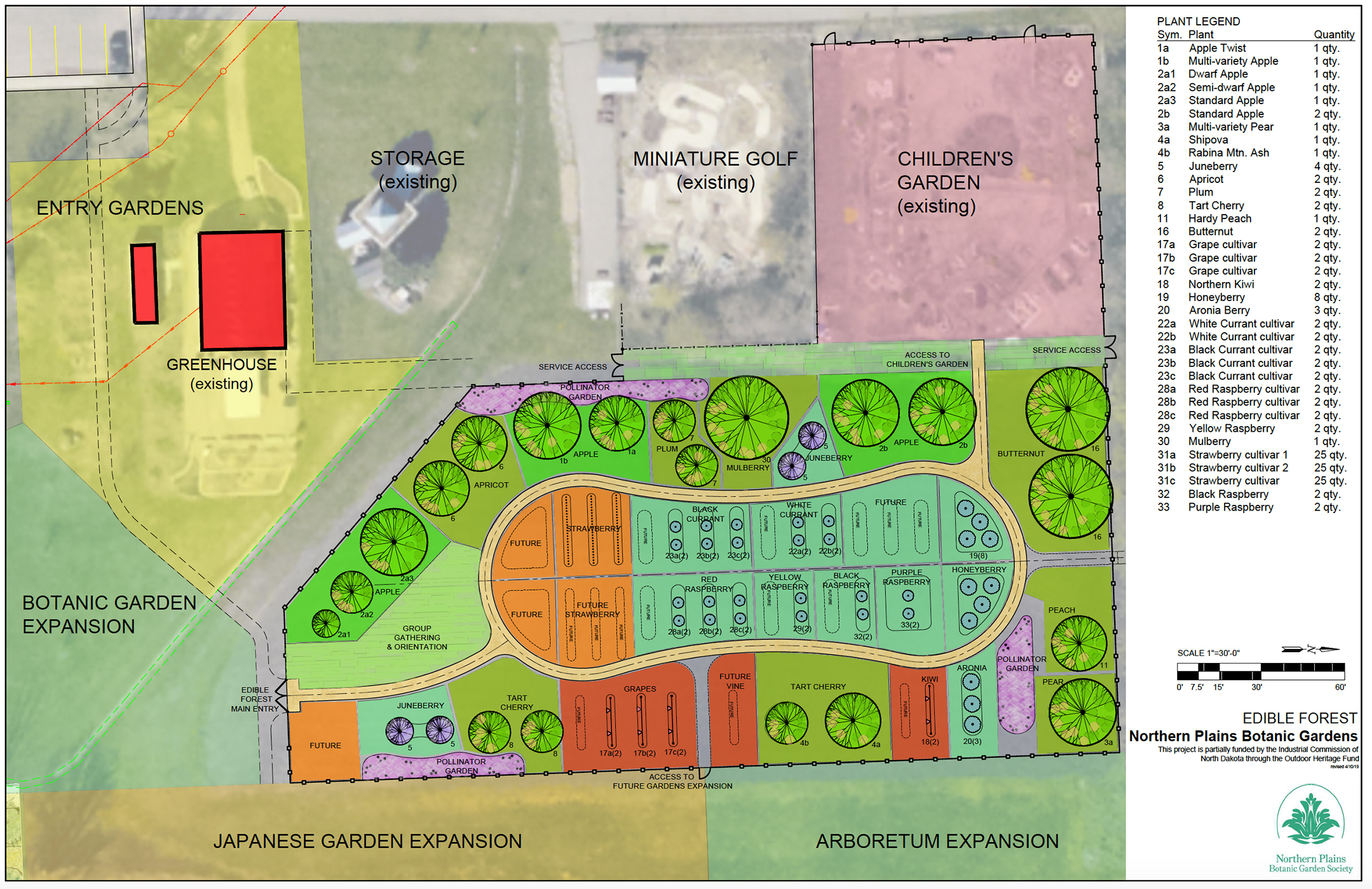 Apple trees are a staple on family farms in North Dakota. But how about peach trees? Apricots? Kiwis? Tart cherries? Butternut?

That’s one of the goals of the Edible Forest, which will break ground this spring in north Fargo. The forest, which will have 21 species of fruit trees with 70 cultivars, is part of the Northern Plains Botanic Gardens (NPBG).

“It’s an educational garden,” said Brandi Malarkey, who is part of the Edible Forest task force. “There is so much focus on local food right now — it’s very much a hot topic.”

The forest will have numerous benefits to both producers and consumers, said Vern Hunter, who is president of the NPBG board. Not only will it be tranquil and beautiful, it’ll be free to the public. The forest is on Fargo Park District land.

“As a garden society, we look at it as a beauty spot where you can come and relax and walk the path and watch the birds,” Hunter said. “The added value is the produce and what comes of it. We can teach people how to grow what’s here.”

The concept started almost a decade ago with Jim Walla of Northern Tree Specialties and James Hanson of Hanson Design and Associates. It was previously thought that it would go on National Park Service land, but that didn’t work out and it was put off until recently.

The task force received a boost when it was given a $33,000 matching grant from the Outdoor Heritage Fund that jump-started the process.

“If it wasn’t for the Outdoor Heritage Fund, we wouldn’t be going forward right now,” Wolla said.

Bob Kuylen, who is vice president of North Dakota Farmers Union, sits on the Outdoor Heritage Fund board. He said the Edible Forest will be good for education on conservation in agriculture.

“It’ll help educate people on the trees they can grow in our environment, and they’ll learn how to properly take care of them,” Kuylen said. “It’s all for the greater good of conservation in agriculture. Maybe some can do some farmers’ markets and have fruits there instead of just vegetables.”

Mindy Grant de Herrera, who is director of educational programs for the Foundation for Agricultural and Rural Resource Management and Sustainability(FARRMS), said the Edible Forest is to “showpiece the possibility” of what farmers could be growing on the side.

“We all know that people like to have things they plant in their yard — the classic is an apple tree,” Grant de Herrera said. “People don’t often broaden out beyond that. The edible forest will show that all of these (fruits) can exist within our foodscape. There probably aren’t many younger generations anymore that remember picking chokecherries with their grandparents. It’s something I remember. This supports farmers being able to diversify and sell within their own communities.”

Within a few weeks, construction will start, said Hanson. That includes the installation of pathways, the lawn and an irrigation system. A perimeter fence to keep rabbits out will follow.

“We’d like to have the grading done, a pathway in and the lawn seeded by June 15,” Hanson said. “Then have the summer to put in edging for planting beds.”

Walla is at the center of it all, with his expertise in growing. He’s already selling the Hardy Peach tree out of his nursery and will be responsible for making sure the trees come to fruition.

“We want people to utilize (the Edible Forest) and say, ‘This is what I want in my yard’ or ‘This is what I want to grow commercially,’” Walla said. “We’ll teach them how to be successful growing it and have student tours, workshops and other garden society tools. We have to open our minds to imagine what the possibilities are and get the word out.”

Walla said he has a few trees in his nursery that he’ll plant in the fall, and the rest will be planted next spring.

“The first fruit will be available next summer,” Walla said. “It’ll look like a full garden by the end of the summer (of 2020).”

Hunter said the plans have room for expansion that could eventually include a Japanese garden.

“The closest one we have is in Minneapolis,” he said. “Wouldn’t it be nice to have one here?”

Food from the Edible Forest will be harvested and included in the education. Leftover food will be donated.

The task force is taking donations to help match the grant from the Outdoor Heritage Fund. Anyone wishing to donate online can visit the NPBG website at www.npbotanicgarden.com and click “donate” at the top right. Donations also can be mailed to Northern Plains Botanic Garden Society, P.O. Box 3031, Fargo, ND, 58108.

“Fruit of every color,” he said. “Fruit from the end of May to November. Trees with lots of different kinds of fruit. Trees in North Dakota that most have never seen. There are a lot of unique things in this.”