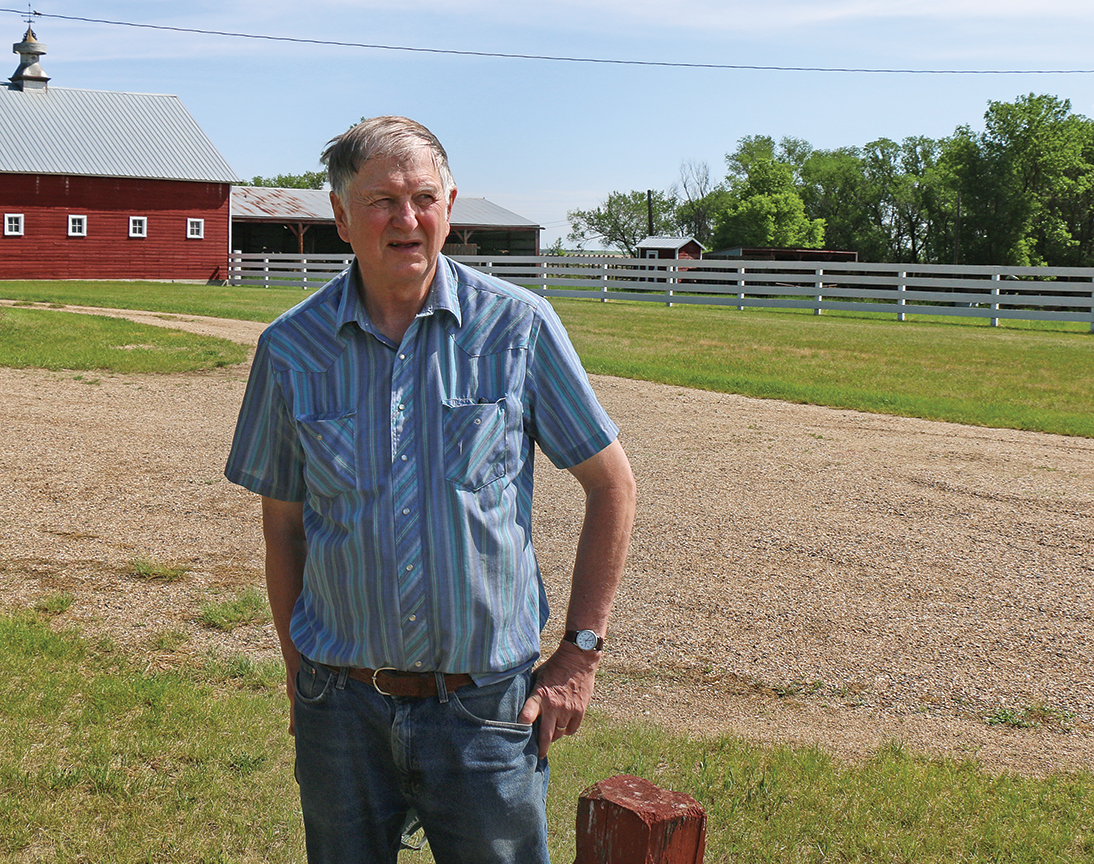 Mike Carlson grabs the chain he put around a split tree in the front yard of his family farm, making sure it’s secure enough to stop any further damage from North Dakota’s relentless wind. The tree, having been part of his family farm for generations, he’s not willing to let it go without a fight. “We’ll see if she makes it.”

The conservation-minded Carlson has a strong love of trees, noting, “You can’t overemphasize the value of shelter belts. Without the trees, this wind will blow you away.”

Now over 70, Carlson has cattle but rents out his farmland. He and his wife Susan are looking to retire and sell their farm northwest of Garrison within the next three years. However, Carlson has a preference – he’d like to find a younger, conservation-minded producer to take over his family’s farm. Finding that buyer has proven to be difficult, however. One-third of America’s 3.4 million farmers are over the age of 65, according to USDA data. Furthermore, almost a million more are within a decade of that age.

It’s a reality Carlson understands, so he’s willing to be flexible, as long as they value conservation.

“I don’t need the highest price,” he said. “I would sell to a good, younger couple at a lower price if they were responsible and shared my values and vision (for conservation), but there are just not a lot of young guys around.”

Carlson’s grandfather August homesteaded the family farm in 1902 after emigrating from Sweden. He arrived at Fort Stevenson via steamboat on the Missouri River, walking the rest of the way to the farm’s current location.

“He carried a stove on his back for a good 20 miles to here,” Carlson said. “I’ve still got the stove in the garage. It’s a tiny, metal stove – heavier than hell.”

August and his siblings homesteaded in the region, with the exception of one brother who instead went to Alaska to mine for gold.

“He sent back a few postcards and then nobody ever heard from him again,” he said. “We never knew what happened to him, but a lot of people went up there looking for gold.”

Mike’s father, Arnold, took over the farm after August’s death from prostate cancer during The Great Depression. Arnold ran the farm until around 10 years ago.

Growing up, Mike attended Farmers Union camps yearly, earning the prestigious Torchbearer Award. He earned a trip to National Farmers Union’s All-States Leadership Camp in Colorado and worked as a camp counselor after high school. He played college basketball at NDSU-Bottineau while getting a degree in forestry.

“Later on in life, I found that to be very useful, especially working with shelter belts,” Carlson said.

He went to the University of Montana in Missoula to get a degree in natural resource conservation, a topic his family had instilled in him as important in the life of a farmer/rancher.

But instead of coming home to take over the family farm, Carlson continued in conservation, eventually working for the Natural Resources Conservation Service for more than 30 years.

“I didn’t come back to the farm because it was the 1980s,” he said. “Interest rates were terrible.”

He wound up in eastern Montana at the forefront of the no-till and pulse crop movements, though he returned to help on the farm in the spring and fall annually until he took it over 10 years ago.

Carlson is steadfast in his belief that he’ll find a young couple who shares his love for conservation, diversification and the family farm. He believes “mega-farms” tend to move away from conservation, choosing to maximize tillable acres in an effort to increase the bottom line. Carlson said it’s been his experience that small- and medium-sized farms are more likely to participate in conservation programs.

“Marginal lands get broken up (on mega-farms), because these farmers paid a very high price for the land – it takes your breath away what some of this land is going for,” he said. “It is not uncommon to see 100-year-old shelter belts bulldozed to gain a few more acres. Sod busting of native pasture continues unabated despite the restrictions of the 1985 farm bill. The old milk cow pasture, with its rocks and hills, is fair game to gain more acres. All of this land, despite being marginal, adds to the overproduction of crops and further drives down prices. Highly erodible cropland still has the same cost of production as good soils and will never achieve the profitability of better land over time.”

In his desire to find buyers, Carlson came up with a set of principles he feels are integral to transitioning America’s farms to the next generation:

• A willing seller or family that believes that a small- or medium-sized operation can be transitioned to a new generation of producers.

• A family farm willing to sell an operation as a unit instead of splitting it up.

• An established family operation and a young family willing to find common ground on pricing and financing from a variety of new and existing sources such as local banks, Bank of North Dakota or USDA.

• A joint philosophy between seller and purchaser on the management of a farm or ranch, and shared conservation strategies and respect for the practices and improvements done in the past.

• Joint long-term cooperation and a belief that helping a new farmer/rancher get started on the land is important and is the right thing to do for our community, state and the land.

• Look into tax benefits, existing or new, that might help both buyer and seller in a transition.

Finding a young couple that shares many of these same beliefs won’t be easy, Carlson acknowledges, but he believes it’s still worth trying.

“We’re at a tipping point with the age of these farmers – I know I’ve got to do something soon,” he said. “I would just dearly love to see a young family here with kids going to school.

“I have a deep attachment to this land, and I’m an optimist. I truly feel agriculture has a great future.”