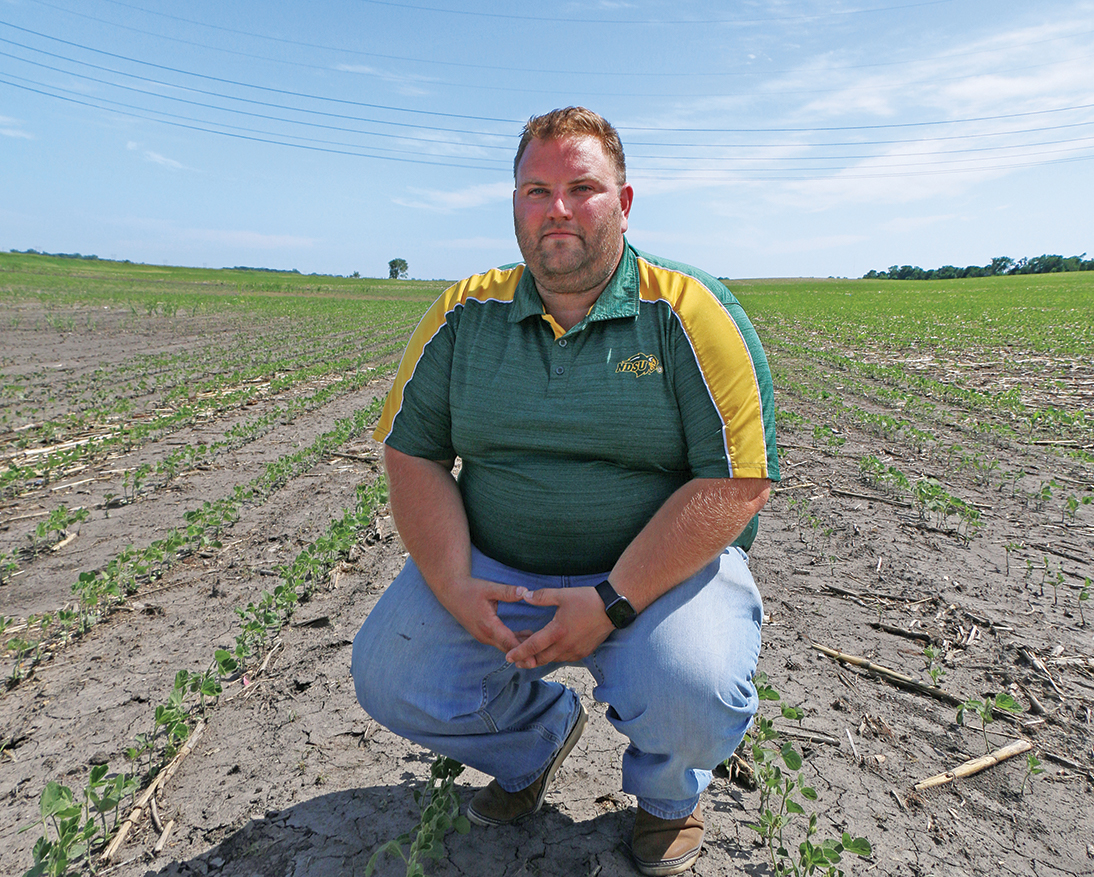 Justin Sherlock fell in love with the big city until tragedy struck.

He was working as the Assistant to the President of National Farmers Union in Washington, D.C., in 2012, when he got the call that his father had died in an automobile accident.

“I knew, within the first few seconds of Mom calling and telling me, that I was moving home,” he said.

Walking away from the city, Justin took over his family’s farm in the Wimbledon-Courtenay area, where he continues to operate.

As a young beginning farmer, he faced many of the same obstacles known to get in the way of transitioning America’s farms and ranches to the next generation – access to land and capital.

His father, Jarrod, had spent his early years working for a farmer before branching out on his own. Though he rented most of the land he farmed, Jarrod had been fortunate to get into farming in the early 2000s and had worked his way to success with good prices by the end of the decade.

“The farmer my dad worked for gave him the opportunity to start renting land and machinery from him those first couple years,” Justin said. “It was a gracious opportunity. The farmer didn’t have to give him that chance, but he did, and my dad was a really hard worker. That’s how my dad started farming.”

Justin, who gave as much credit to his mom and her off-farm career as a nurse in supporting a beginning operation, said his parents were helped by “a good 10-year period in farming.”

“It was a lot of hard work, and a little bit of luck,” Justin said. “They were a good team together.”

But after Jarrod’s death, Justin made the decision to take over the farm, something he believed would have taken possibly another decade at least, as his father was essentially still a beginning farmer.

“I had hoped there would be room for me in the future,” he said.

Justin moved home toward the end of harvest in 2012, a bountiful season with near-record prices, which Justin said made a big difference.

“Good prices and yields that year,” he said. “Thankfully, there were resources there to cover the bills and get a lot sorted out.”

He remembers the kindness of friends and business partners during that time, something he won’t soon forget, as he was trying to figure out which direction to go with his own life.

“With the outpouring of support from neighbors, we didn’t have to worry about figuring out machinery or lining up harvest,” he said. “It was just done. I just had to take care of some of the marketing stuff with the elevators. It’s why I like living in North Dakota.”

In his first spring of farming, Justin recalled struggling immensely, with his grandfather by his side to help him through it.

“Looking back now, I don’t know how we got that crop in that first year,” he said. “We just did whatever we had to do and got it done.”

Justin, in his ninth year and technically still a beginning farmer for two more years, is looking at loans to purchase the family’s land from his mother. He plans on utilizing a USDA beginning farmer loan program to do that. He said Bank of North Dakota’s Beginning Farmer Chattel Loan program helped him purchase some equipment to get going (he was able to borrow the rest of the equipment from neighbors).

“That let me buy the equipment from mom at a reasonable rate,” he said. “(BND) assumed some of the risk so my bank could give me the loan. That really helped me a lot. (BND) has a lot of good resources. (Farm Service Agency) does as well.”

As it often does, commodity prices dropped significantly from their highs in 2012-13, which Justin said made it difficult to keep going on the farm.

“I didn’t expect it to fall off the cliff as fast and hard as it did,” he said. “By year three, we were in the worst prices we’d seen in seven or eight years.

“But I didn’t come home to make a bunch of money. If you’re looking just to make money, there are a lot easier ways that are a lot less stressful and less hard on your body and emotional well-being than farming. I do it because I love it. It’s rewarding to see the fruits of your labor.”

He ended up befriending a local farmer who has paired with him to share equipment and other costs.

“Les and Diane Koll, they have been great,” he said. “I’m really fortunate. I probably wouldn’t be farming today had I not ended up working with them.”

Sherlock has taken every bit of farming education he can get, utilizing programs within North Dakota Farmers Union and the American Soybean Association to get better at his craft. He is currently on the board of the North Dakota Soybean Growers Association.

He said the task for young farmers is to make sure they’re connecting with established operators to be first in line when any opportunities come about.

“Farming in small communities is super competitive when it comes to land access,” he said. “We need to get over that lack of communication. If you’re a retiring farmer, you need to put it out there that you want a young person to farm your ground, and you might have to be a mentor and help them.”

Secondly, Sherlock said finding business partners that can be trusted is essential.

“Develop those relationships because you need those people,” he said. “Don’t do it on your own. I rely on a marketing person, a crop consultant and my banker. It’s a two-way discussion. North Dakota also has an adult farm learning program. I was involved with that for a couple of years. That really teaches you to hone in and dial in your numbers.”

Sherlock said beginning farmers simply can’t do it on their own. Like him, don’t be afraid to ask for help, he said.

“I got really lucky without Dad there,” he said. “I found other family that may not be family by blood, but I wouldn’t have been able to keep going without them. I probably would have thrown in the towel had it not been for working with some of these guys that have the experience in the tougher times. I was able to lean on their guidance.”