A LOVE OF CAMP: Van Bruggens committed to Farmers Union 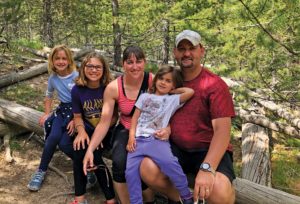 Rarely does a day go by when Farmers Union isn’t on the mind of Tyler Van Bruggen.

The Farmers Union Insurance agent in Valley City has made it his career, but Van Bruggen’s roots go much deeper than insurance. He’s heavily involved in the youth program in Barnes County.

Not only is he an agent, he’s also Barnes County Farmers Union’s EPIC coach, directing the youth program. The program features multiple events each year – all free – and helps support youth who want to go to North Dakota Farmers Union’s summer camp.

“If you go to our pizza and bowling night, summer camp and then our EPIC event in August, you’ll get a $100 gift card to the local Cenex,” Van Bruggen said. “It’s really a no brainer for them.”

Van Bruggen’s passion for the youth program started at an early age, as he was raised in a Farmers Union family. His father Ron is president of LaMoure County Farmers Union, and his mother Gayann was the county’s longtime youth director, a position now held by Tyler’s sister, Carly Rott.

“It was forced upon me at an early age,” Tyler joked. “They even got me into camp a year before I was supposed to. It was the highlight of every summer.”

Tyler met his future wife Angela Sandness at the now-defunct camp in Grand Rapids, not far from LaMoure. Like Tyler, Angela grew up with Farmers Union. All of the seven kids combined in the Larry and Karen Sandness and Ron and Gayann Van Bruggen families went to camp, and six became camp counselors.

“We went to camp as soon as we possibly could all the way through high school,” Angela said. “My grandmother, who is 96 now, taught day classes for decades and my mom took over and still teaches day classes.”

Tyler and Angela have three daughters: Kylie (10), Maya (7) and Harper (4). Kylie has gone to her first camp, while Maya is getting close. Harper may be the youngest, but she’s been just as eager.

“She’s tagged along with me when I’ve visited the camp,” he said. “She’s been begging to go already.”

“It’s fun to see our oldest one go, because it’s fun to remember what that experience was like for us,” Angela said. “Making all of those friends and connections, she’ll get that same experience. A lot of the people we were on summer staff with are married and have their own kids. They’re scattered all over the state. It’ll be fun for our kids to meet up.”

Angela and Tyler’s dedication didn’t stop as participants in the youth program. They both helped start the NDFU collegiate chapter at North Dakota State University. Additionally, Tyler and other Farmers Union Insurance agents promote the youth program through scholarships for families who can’t afford to send their children to camp.

“We have a lot of agents buying into that,” Tyler said. “It’s an easy thing to get behind and support.”

Angela said the Farmers Union experience, starting with the youth program, has paid dividends for her family, and she feels it’s important they pay it forward.

“We gained a lot from it, even in my professional life,” she said. “The leadership skills I gained from what we did in camp and day classes, that’s benefitted me. The program really helped me. I want to keep that going.”